A Video Approach to Improving Outcomes in Digit Replantation 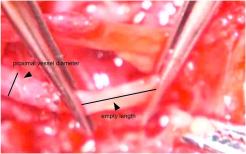 Arterial and venous reperfusion problems are common causes of failure in digit replantation, so excellent vascular anastomotic technique is crucial during these operations. One way to assess the patency of vascular anastomoses intraoperatively is to estimate refilling velocity with the naked eye. An even better way is described by Zhu et al. in the May 2, 2018 edition of The Journal of Bone & Joint Surgery.

The authors divided their study into two phases. During phase I, they found that a slower refilling velocity ratio (RVR) in 103 replanted digits, calculated with the aid of videos recorded at 1,000 frames per second, was associated with replantation failure. In phase II, the authors applied RVR goals established from phase I to another 79 replanted digits to determine whether the additional objective guidance increased the replantation survival rate compared with historical controls.

Based on phase I results, Zhu et al. set the arterial RVR goal to 0.4 and the venous RVR sum goal to 1.0. Using those goals for guidance, the authors found that the phase II success rate (96%) was significantly higher than that among historical controls (87%). In several phase I cases, intraoperative observations of specialists considered anastomoses to be acceptable, but the high-speed video data revealed that improvements were required.

One downside to obtaining this objective video data about anastomotic quality is that it adds 10 to 15 minutes to operative time. Consequently, the authors cite the need for a “well-designed, randomized, double-blinded clinical trial…to provide stronger evidence of this assessment technique.”

Are you a JBJS Clinical Classroom subscriber? Remember to keep your Self Assessment meter up to date for EACH subspecialty.⁠
Don't miss your chance to be part of the 2021 JBJS Miller Review Course I - the leading immersive, five-day course designed to prepare you for Part I of the ABOS Exam.⁠
A Culture Change in Geriatric Traumatology: Holistic and Patient-Tailored Care for Frail Patients with Fractures⁠
Giant Sclerosing Epithelioid Fibrosarcoma of the Thigh:⁠
The latest episode of #OrthoJOE🎧🎙️ is now streaming. Listen as Mo & Marc highlight a recent large database study from The Hospital for Special Surgery and use it as a springboard to discuss a number of issues related to the appropriateness, timing, and investigation of knee arthroscopy in patients with degenerative disease. ⁠
Calling all trauma surgeons. See new trauma content from JBJS. See link in bio.