Structural Allografts Can Work for Acetabular Defects in THA 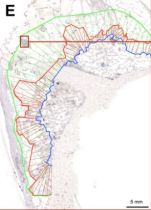 Allograft bone is used often in orthopaedic surgery. However, the use of structural allografts to address large acetabular defects in total hip arthroplasty (THA) is not common. But it may become more so in light of the study by Butscheidt et al. in the August 15, 2018 issue of JBJS. The authors add to our knowledge about these relatively rare procedures by evaluating the incorporation of structural acetabular allografts into host bone among 13 complete pelvic explants containing allograft that had been in place for a mean of 13 years.

Using sophisticated imaging and histological techniques, the authors found that in 10 out of the 13 specimens retrieved, 100% of the interface was characterized by direct contact and additional overlap of the allograft bone and the host bone. The remaining 3 allografts showed direct contact along 25% to 80% of the interface.  The authors found no correlation between ingrowth of the host bone into the allograft and the amount of time the allograft had spent in situ, leading them to surmise that “a large proportion of the incorporation process may be completed within the first weeks.”

Large, structural allografts are not commonly used for acetabular reconstructions, as most surgeons seem to favor other options.  (See the JBJS Clinical Summary on “Managing Acetabular Defects in Hip Arthroplasty.”) While a postmortem study of 13 cases may not be “practice-changing,“ the Butscheidt et al. analysis does provide some detailed clarity as to what surgeons can expect from these large allograft reconstructions in terms of incorporation with host bone. Obviously, one limitation of this study is that structural allografts that never incorporated with the host bone probably failed early and would not be available for analysis in a long-follow-up retrieval study.

There was an error retrieving images from Instagram. An attempt will be remade in a few minutes.