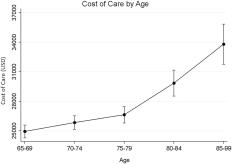 The cost of medical care in the United States has been shown to rise with advancing patient age, and total joint arthroplasty (TJA) is a prime example of this unsurprising phenomenon. In attempts to curtail costs and reduce variability, Medicare and other payers have introduced alternative payment models (APMs), such as the Bundled Payments for Care Improvement (BPCI) initiative. In this model’s application to TJA, when participating institutions keep the cost of the “episode” below a risk-adjusted target price, they accrue the savings as a profit, but they sustain a financial penalty if the episode costs more than the target price.

Multiple studies have suggested that APMs can negatively affect the fiscal health of institutions that care for many high-risk patients. Although increasing age has been associated with higher-cost episodes of care, age is not one of the factors that the BPCI model accounts for. Consequently, concerns have been raised that providers may practice “cost discrimination” against very old patients.

In the October 7, 2020 issue of The Journal, Petersen et al. examine how an aging population has affected a New York City orthopaedic center in terms of the BPCI model applied to TJA. The authors analyzed the relationship between patient age and cost of care among 1,662 patients who underwent primary total hip and knee arthroplasty over a 3-year period under BPCI. They then used a modeling tool to predict shifting age demographics for their local area out to the year 2040.

Petersen et al. found that under BPCI, their institution sustained a nearly $2,000-per-case loss for TJA care episodes among patients 85 to 99 years of age. Currently this loss is offset by profits realized by performing TJAs in younger patients. However, predictive modeling identified an inflection point of 2030, after which a relative increase in older patients and a decrease in younger patients will yield an overall net decrease in profits for primary TJA.

Because no one, including orthopaedic surgeons, can turn back the clock on aging, health care stakeholders must find ways either to adjust downward the cost of care for the elderly (seemingly difficult without adversely affecting outcomes) or adjust reimbursement models to account for the increased costs associated with aging. I agree with the conclusion of Petersen et al.: “The BPCI initiative and [other] novel APMs should consider age as a modifier for reimbursement to incentivize care for the more vulnerable and costly age groups in the future.”