There is a wry saying in academic medicine that “nothing ruins good results like long-term follow-up.” But long-term follow-up helps us truly understand how our orthopaedic interventions affect patients. This is especially important with procedures on children, and the orthopaedic surgeons at the University of Iowa have been masterful with long-term outcome analysis in pediatric orthopaedics. They demonstrate that again in the August 5, 2020 issue of The Journal, as Scott et al. present their results comparing outcomes among 2 cohorts of patients who underwent treatment for developmental hip dislocations between the ages of 18 months and 5 years—and who were followed for a minimum of 40 years.

I commend the authors for their dedication to analyzing truly long-term follow-up data to help us understand treatment outcomes among late-diagnosed developmental hip dislocations in kids. Long-term follow-up may “ruin” good results, but it gives us more accurate and useful results. And, in this case, the findings reminded us how important it is to diagnose and treat developmental hip dislocations as early in a child’s life as possible.

Read the JBJS Clinical Summary about this topic.

Orthopaedic surgeons continually seek to refine techniques to improve their patients’ surgical outcomes. Surgical treatments for femoroacetabular impingement (FAI) syndrome are no exception, and careful patient selection is also critical to the success of these interventions. In the June 17, 2020 issue of The Journal, Ceylan et al. analyzed a single-surgeon prospective database to identify risk factors for treatment failure after a particular hip-preservation surgery known as mini-open femoroacetabular osteoplasty (FAO). In this study, the authors defined “failure” as the eventual need for a total hip arthroplasty (THA) over a minimum 2-year follow-up.

The 749 procedures studied were performed between 2004 and 2016 and involved treatment of the femur, acetabular rim, labrum, and chondral surfaces if necessary. Labral repair was performed on all hips that had adequate healthy tissue, while those that did not were treated with partial or total excision of the labrum.

Sixty-eight  hips (9%) underwent THA. The patients who did not need a hip replacement were significantly younger (mean age of 33 years vs nearly 42) and were operated on after the surgeon had more experience. Other significant differences among the failure group included the duration of symptoms (twice as long, at 3.6 years), higher preop alpha angles, and a higher percentage of total labral resections performed.

Radiographic evidence of hip dysplasia was also a significant risk factor for failure, along with labral hypertrophy and acetabular retroversion (both of which may be considered proxies for volume-deficient acetabuli). After adjusting for covariates, Ceylan et al. found that less surgeon experience, older patient age, prolonged preoperative symptoms, increased medial joint space narrowing and Tonnis grade, and developmental hip dysplasia were all associated with a higher risk of failure after FAO surgery.

Although these findings do not represent results using the most up-to-date arthroscopic techniques for FAI treatment, they do highlight characteristics that can and should be discussed with patients with FAI when the subject of expected surgical outcomes arises during shared decision making.

Every month, JBJS publishes a Specialty Update—a review of the most pertinent and impactful studies published in the orthopaedic literature during the previous year in 13 subspecialties. Click here for a collection of all OrthoBuzz Specialty Update summaries.

This month, Derek Kelly, MD, co-author of the February 21, 2018 Specialty Update on Pediatric Orthopaedics, selected the most clinically compelling findings from among the more than 50 studies summarized in the Specialty Update.

—An analysis of pediatric femoral shaft fractures before and after the publication of clinical practice guidelines1 revealed a significant increase in the use of interlocked intramedullary nails in patients younger than 11 years of age, and an increase in surgical management for patients younger than 5 years of age. Considerable variability among level-I pediatric trauma centers highlights the need for further outcome studies to facilitate updating of existing guidelines.

—A prospective cohort study of pain and opioid use among patients following posterior spinal fusion for adolescent idiopathic scoliosis found that increased age, male sex, greater BMI, and preoperative pain levels were associated with increased opioid use. Findings like these may help guide clinicians in opioid dispensing practices that minimize the problem of leftover medication.

—Two stratification/scoring systems may aid in the early prediction of musculoskeletal infection severity and promote efficient allocation of hospital resources. A 3-tiered stratification system described by Mignemi et al.2 correlated with markers of inflammatory  response and hospital outcomes. Athey et al.3 validated a severity-of-illness score and then modified it for patients with acute hematogenous osteomyelitis.

—A study of closed reduction for developmental dysplasia of the hip4 revealed that 91% of 87 hips achieved stable closed reduction. Of those, 91% remained stable at the 1-year follow-up. Osteonecrosis occurred in 25% of cases, but it was not associated with the presence of an ossific nucleus, a history of femoral-head reducibility, or age at closed reduction. 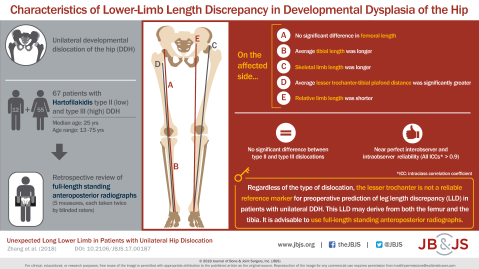 The Bernese periacetabular osteotomy (PAO) has become the procedure of choice for treating symptomatic acetabular dysplasia. But how long-lasting are its benefits? Quite, according to one of the largest intermediate-term follow-up studies on this procedure, authored by Wells et al. in the February 7, 2018 edition of The Journal of Bone & Joint Surgery.

Among 154 hips (average patient age of 26 years) treated with PAO at a single center between 1994 and 2008, the survival rate, with total hip arthroplasty (THA) as the endpoint, was 92% at 15 years postoperatively. When failure was defined as a conversion from PAO to THA or a symptomatic hip, the hip-preservation rate was 79% at a mean follow-up of 10.3 years.

After carefully analyzing the data to identify factors that contributed to failure or success, the authors discovered that:

The authors also recommend against managing patients with symptomatic acetabular dysplasia with hip arthroscopy because “it fails to address the underlying pathomechanics found in developmental dysplasia of the hip.”

The exact cause of osteonecrosis in the setting of developmental dysplasia of the hip (DDH) is unknown. However, some pediatric orthopaedists are concerned that DDH treatment in the absence of the ossific nucleus of the femoral head increases the risk of subsequent osteonecrosis. That concern has to be weighed against evidence that delayed DDH treatment may lead to more difficult reduction and potentially necessitate additional procedures.

In the May 3, 2017 issue of JBJS, Chen et al. performed a meta-analysis of cohort and case-control studies to clarify this potential “conflict of interests” in DDH treatment. Twenty-one observational studies were included. Of the 969 hips with an ossific nucleus present before reduction, 198 hips (20.4%) had eventual osteonecrosis events; among the 608 hips without an ossific nucleus, 129 (21.2%) had osteonecrosis events. The authors state that this difference “is neither clinically important nor [statistically] significant.”

A sub-analysis determined that the presence of the ossific nucleus was not associated with significantly decreased odds of osteonecrosis even among patients who later developed more severe (grades II to IV) osteonecrosis. Chen et al. also performed a “meta-regression” of studies with short- and long-term follow-ups, finding “no evidence for a protective effect of the ossific nucleus with either short or long-term follow-up.”

Although 11 of the 21 studies in the meta-analysis were deemed high quality and 10 were of moderate quality, the inherent limitations of a meta-analysis derived predominantly from retrospective data prompted the authors to call for “further prospective studies with long-term follow-up and blinded outcome assessors.” Nevertheless, these findings lend additional support to the belief that treatment for DDH should not be delayed based on the absence of the femoral head ossific nucleus.

Every month, JBJS publishes a Specialty Update—a review of the most pertinent and impactful studies published in the orthopaedic literature during the previous year in 13 subspecialties. Click here for a collection of all OrthoBuzz Specialty Update summaries.

This month, Derek Kelly, MD, co-author of the February 15, 2017 Specialty Update on Pediatric Orthopaedics, selected the five most clinically compelling findings from among the 60 studies summarized in the Specialty Update.

Upper-Extremity Trauma
—A systematic review of eight randomized studies comparing splinting with casting for distal radial buckle fractures confirmed that splinting was superior in function, cost, and convenience, without an increased complication rate.1

Lower-Extremity Trauma
—A review of the treatment of 361 pediatric diaphyseal femoral fractures before and after the 2009 publication of AAOS clinical guidelines for treating such fractures revealed that the guidance had little impact on the treatment algorithm in one pediatric hospital.

Spine
—Bracing remains an integral part of managing adolescent idiopathic scoliosis, but patient compliance with brace wear is variable. A prospective study of 220 patients demonstrated that physician counseling based on compliance-monitoring data from sensors embedded in the brace improved patients’ average daily orthotic use.

Hip
—AAOS-published evidence-based guidelines on the detection and nonoperative management of developmental dysplasia of the hip (DDH) in infants from birth to 6 months of age determined that only two of nine recommendations gleaned from evidence in existing literature could be rated as “moderate” in strength:

—A study of the utility of inserting an intraoperative intracranial pressure (ICP) monitor during closed reduction and pinning for slipped capital femoral epiphysis (SCFE) found that 6 of 15 unstable hips had no perfusion according to ICP monitoring. However, all 6 hips were subsequently reperfused with percutaneous capsular decompression, and no osteonecrosis developed over the next 2 years.

Treating developmental dysplasia of the hip (DDH) with the Pavlik harness is safe and successful in about 90% of cases. But what about the 10% of patients for whom this treatment is not effective or causes complications The complimentary JBJS webinar on Wednesday, Feb. 24, 2016 at 8:00 PM EST will focus on how orthopaedists can:

Following presentations about JBJS-published research by Daniel Sucato, MD; Lucas Murnaghan, MD; and Wudbhav Sankar, MD, DDH expert Scott Mubarak, MD will expand on all three author presentations. The last 15 minutes of the webinar will be devoted to a live Q&A session, during which audience members can ask questions of the authors and commentator. The webinar will be moderated by Paul Sponseller, MD.