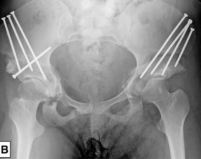 The treatment of hip dysplasia in patients with Down syndrome is challenging. Until the March 7, 2018 issue of JBJS, only short-term results from periacetabular osteotomies (PAOs) for treating hip dysplasia in this population had been reported.  Now, Maranho et al. review the outcomes among 19 patients (26 hips) who underwent PAOs at Boston Children’s Hospital over 20 years, with an average follow up of 13.1 years.

Defining a “failed PAO” as a postoperative Harris Hip Score (HHS) <60 or a recommendation for a total hip arthroplasty or arthrodesis, the authors demonstrated the following key findings:

These findings seem to indicate that younger, less arthritic patients with Down syndrome can expect to have reliable outcomes following a PAO. This is encouraging, as it may help those patients maintain independent living by decreasing their arthritis progression and increasing the stability of their hips.  Even though the factors most associated with PAO failure are beyond the surgeon’s control, this data should  facilitate focused discussions among surgeons, patients, and their parents or guardians about expected outcomes in these situations.

OrthoBuzz regularly brings you a current commentary on a “classic” article from The Journal of Bone & Joint Surgery. These articles have been selected by the Editor-in-Chief and Deputy Editors of The Journal because of their long-standing significance to the orthopaedic community and the many citations they receive in the literature. Our OrthoBuzz commentators highlight the impact that these JBJS articles have had on the practice of orthopaedics. Please feel free to join the conversation by clicking on the “Leave a Comment” button in the box to the left.

Having passed the half-century mark with continued relevance, this classic JBJS article by T.G. Barlow, published in the British volume in 1962, rewards the reader with pearls and insights that can still help us make good decisions about treatment of infants with hip dysplasia. Exploring new approaches always pays rich dividends, and this report details Barlow’s observations from a five-year study (1957­­-1962) in which he examined all newborns at his hospital and followed them up at one year of age. This effort was undertaken at a time before the emerging field of pediatric orthopaedics had many full-time adherents.

Barlow studied nearly 10,000 newborns at the Hope Hospital in Manchester, England. He conducted the first examinations during the first week of life, in an era when newborns in the UK stayed in the hospital for at least one week. He carefully recorded his findings and made observations on incidence of hip dislocation, natural history, and treatment.

His first contribution, for which he is still remembered, was to show that in newborns, with their low resting muscle and tissue tension, the Ortolani test is often subtle, and a dislocated hip may escape notice. The Ortolani test was often impressive in older babies, but less so in newborns. Therefore, Barlow devised his eponymous test, which increases the proprioceptive feedback by applying axial pressure and provoking subluxation or dislocation. Simply put, it is often easier to feel the hip displacing with pressure than to feel it slip back in.  The number of babies who have benefited from this method of early detection is too numerous to count!

Barlow’s other observations are equally relevant and useful. He observed that many babies with dislocatable but non-dislocated hips will stabilize naturally. He showed that only one-eighth of unstable hips will have a persistent dislocation, which is why we now only treat dislocated hips immediately upon detection.  Recent articles1 have added further insights in this regard.

Barlow also showed that with a program of screening and treatment, no patient in his experience presented at a year of age with a hip dislocation. We still debate the proper method of early detection, but he properly targeted the neonatal period as the time that instability usually begins. Barlow also demonstrated a simple abduction splint made of aluminum and leather that holds the hips in flexion and abduction. Although the Pavlik harness has become more popular as an initial treatment, experts have recently come to realize that a fixed-angle brace can benefit some children who do not stabilize in a Pavlik.2

This classic article was fun to re-read and remains useful to general and pediatric orthopaedic surgeons. Barlow’s disciplined undertaking has shaped our understanding of this important disorder. The man and his insights are remembered for good reason.

This month’s Image Quiz from the JBJS Journal of Orthopaedics for Physician Assistants (JOPA) highlights the case of an 8-year-old boy who presents with a 3-month history of in-toeing. Anteroposterior pelvic and bilateral frog-leg radiographs are included, along with measurements of the foot progression angle, medial rotation of the hip, and the thigh-foot axis.

The Image Quiz reviews the natural history of lower-extremity rotational deformities in children, and describes in detail how to make the physical-examination measurements that helped answer the clinical question of whether this patient’s in-toeing was benign or a sign of a more serious deformity.

Test Prep and Stats Module from JBJS for $99 with Promo code: VRCREC. See link in bio.
In this episode, Marc and Mo are joined by special guest Bruce Sangeorzan—Professor of Orthopaedics at the University of Washington and world-renowned foot and ankle researcher—in a lively discussion on the past, present, and future of ankle replacement. ⁠
Patient Age and Cell Concentration Influence Prevalence and Concentration of Progenitors in Bone Marrow Aspirates: An Analysis of 436 Patients⁠
JBJS Open Access Issue Now Available - See link in bio. Content free from JBJS.
Achieving a Diverse, Equitable, and Inclusive Environment for the Black Orthopaedic Surgeon⁠
In Vivo Elongation Patterns of the Collateral Ligaments in Healthy Knees During Functional Activities⁠