The rate of adoption of knowledge gleaned from multiple well-done randomized clinical trials into medical practice is disappointingly slow. This has been well-documented in cardiovascular medicine, and the examples in orthopaedic surgery are embarrassingly similar. A corollary phenomenon exists with the slow rate of transfer of information from basic science studies to orthopaedic clinical practice.

These “disconnects” occur largely because we tend to adopt the practices of our residency faculty, often without any rational inquiry. Having been an oral examiner for the Part II ABOS Oral Boards, I frequently asked, “Why did you decide on that approach to the patient’s problem?” And I often heard in response, “That’s the way it was done in my residency.”

In the September 18, 2019 issue of The Journal, Goswami et al,. report findings from a well-designed in vitro study demonstrating that the common practice of adding the antibiotics polymyxin and bacitracin to irrigation solution to lower the risk of infection is not based on sound evidence. While adding antibiotics might make intuitive sense, according to these authors, it is “a futile exercise.”

After testing 8 different irrigation solutions for efficacy against S. aureus and E. coli and for toxicity to musculoskeletal cells, Goswami et al. concluded that “our results provide further support for the use of dilute povidone-iodine because of its bactericidal properties, relatively limited toxicity,… and modest cost.” They go on to say that their findings bring into question the widespread usage of polymyxin-bacitracin.

Certainly, we need to assemble more evidence from additional research to identify the optimal irrigation solution for orthopaedic surgery, but in the interim, we should probably stop using polymyxin-bacitracin. Doing so would have the added benefits of lowering costs and not exacerbating the serious problem of antimicrobial resistance. There are many areas of clinical practice where we have no evidence either for against a particular approach. But when we do have solid evidence, even if it’s from an in vitro study, we should work together to improve the rates of adoption into clinical practice. 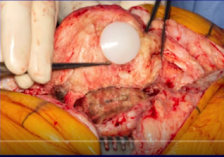 Nowadays, chronic deep periprosthetic joint infections (PJIs) are typically treated with 2-stage exchange arthroplasty, but what about acute PJIs? In the December 6, 2017 edition of JBJS, Bryan et al. report on a retrospective cohort study of acute infections after hip arthroplasty. The results suggest we’ve come a long way in identifying patients with early infections and that contemporary irrigation-and-debridement protocols are more successful than older methods.

The researchers studied 6-year outcomes in 90 hips that had undergone either total or hemiarthroplasty and that were determined to have either acute early postoperative infections (n=66) or acute hematogenous infections (n=24). All the infected hips were managed with either irrigation, debridement, and modular head and liner exchange (70%) or with irrigation and debridement alone (30%). The authors stratified the patients into those without comorbidities (A), those with 1 or 2 comorbidities (B), and those with >2 comorbidities (C). Postoperatively, patients were treated with broad-spectrum intravenous antibiotics, followed by targeted therapy administered by infectious disease specialists.

Of the 90 acute infections, failure—defined as uneradicated infection, subsequent removal of any component for infection, unplanned second wound debridement for ongoing infection, or infection-related mortality—occurred in 15 hips (17%). Of those 15, 9 required component removal. The chances of treatment failure were slightly higher in cases of hematogenous infection (21%), compared with acute early postoperative infection (15%), but that difference was not statistically significant. Significant comorbidity-related failure-rate differences were found: failure occurred in 8% of the grade-A patients, 16% of grade-B patients, and 44% of grade-C patients. The most common infecting organism was methicillin-sensitive Staphylococcus aureus (MSSA).

From this overall 6-year success rate of 83%, the authors conclude that “with modern inclusion criteria for acute infection, modern surgical techniques, and modern antibiotic therapy…the rate of success was higher than in most historic reports.”

But the uncommon has occurred. In the November 1, 2017 issue of The Journal, Chiaramonti et al. present research on the effects of 20-psi pulsatile lavage versus 1-psi bulb-syringe irrigation on soft tissue in a rat model of blast injuries. With support from the US Department of Defense, Chiaramonti et al. developed an elegant animal study that found radiological and histological evidence that lavage under pressure—previously thought to be critical to removing contamination in high-energy open fractures—results in muscle necrosis and wound complications.

The aforementioned rare alignment between basic-research findings and clinical findings in people relates to a large multicenter randomized clinical trial recently published in The New England Journal of Medicine. That study found that one-year reoperation rates among nearly 2,500 patients treated surgically for open-fracture wounds were similar whether high, low, or very low irrigation pressures were used. This is a case where the clinical advice from basic-study authors Chiaramonti et al. to keep “delivery device irrigation pressure below the 15 to 20-psi range” when managing open fractures is based on very solid ground.

In the March 15, 2017 issue of The Journal, Johns et al. report results from a Level III cohort study comparing arthroscopic vs open irrigation for control of acute native-knee sepsis. The authors collected information on more than 160 patients with knee sepsis over a 15-year period, which is a large cohort of patients with this relatively unusual clinical problem.

The data show a cumulative success rate of 97% with arthroscopic treatment after 3 irrigations and debridements vs 83% success in the arthrotomy group after the same number of procedures—a clinically important difference. Significantly fewer arthroscopic procedures were required for successful treatment, relative to open procedures, and post-procedure median knee range of motion was significantly greater in the arthroscopic group (90°) than in the open treatment group (70°).

The fact is that arthroscopic instruments allow a greater volume of irrigation fluid to be instilled with better access to the posterior recesses of the knee. With an open arthrotomy, it is more difficult to irrigate with high volumes, and the posterior recesses of the knee are not well accessed. It seems clear that arthroscopic management of acute knee sepsis should be the standard of care for these reasons, as well as because the technique is minimally invasive in terms of soft tissue stripping and incision size.

Treating infections of major-weight bearing joints is following a trend seen in surgical management of many orthopaedic conditions—smaller exposures with use of adjunctive visualization techniques.

OrthoBuzz regularly brings you a current commentary on a “classic” article from The Journal of Bone & Joint Surgery. These articles have been selected by the Editor-in-Chief and Deputy Editors of The Journal because of their long-standing significance to the orthopaedic community and the many citations they receive in the literature. Our OrthoBuzz commentators highlight the impact that these JBJS articles have had on the practice of orthopaedics. Please feel free to join the conversation about these classics by clicking on the “Leave a Comment” button in the box to the left.

From the time of Hippocrates until after the American Civil War, open fractures and other wounds prone to sepsis were fatal injuries in approximately 50% of patients, and amputation of the affected limb was recognized as lifesaving treatment. With the adoption of antisepsis and formal surgical débridement in the late 19th century, improved stabilization techniques in the 20th century, and the introduction of antibiotics, death as an outcome was virtually eliminated, but nonunion with or without infection remained challenging complications.

In the 1960s, reports concluding that in open fracture care “prophylactic antibiotics were of questionable value” created great debate and controversy among surgeons. The pioneering 1974 JBJS study by Patzakis et al., titled “The Role of Antibiotics in the Management of Open Fractures,” addressed this controversy by asking and answering three key questions:

The study demonstrated that nearly two-thirds of wounds caused by direct injury and an even higher rate of gunshot wounds were contaminated. That finding, along with the fact that several days must elapse before a culture can be considered truly sterile, makes true “prophylaxis” in open fractures practicable only if antibiotics are applied to all patients. Patzakis et al. also stressed that antibiotic treatment is not a substitute for the critically important practice of extensive surgical debridement of all devitalized tissue. Urgent surgical irrigation and debridement remain the mainstay of infection eradication, although questions persist regarding the optimal irrigation solution, volume, and delivery pressure.

I agree with the authors of this classic article that the term “prophylaxis” is not appropriate because these wounds should presumptively be considered contaminated and treated with effective antibiotics. Wound sampling has a poor predictive value in determining subsequent infections, so a first-generation cephalosporin should be administered as soon as possible, with or without coverage for gram-negative bacteria. In addition, as Lawing et al. found in a 2015 JBJS study, local aqueous aminoglycoside administration as an adjunct to systemic antibiotics may be effective in lowering infection rates in open fractures.

This classic prospective study by Patzakis et al. in the 1970s has prompted us to ask and pursue answers to many more clinical questions regarding open-fracture infections. For example, the optimal duration of antibiotic administration has not been well defined, but they should be continued for more than 24 hours. The evidence to support either extending the duration or broadening the antibiotic protocol for Gustilo type III wounds remains inconclusive, and more investigation into this question with higher-level research methods is needed.

Open Fractures – How Should We Irrigate Them?

Irrigation and debridement of open fractures have been standard practices since the late 1800s.  However, the finer details have not been agreed upon. For example, should we use higher pressures with pulsatile lavage devices?  And will adding soap to standard saline irrigation solution get better results? Answers to those two questions from lab and animal studies over the years have been limited and contradictory. The goal of the recently reported FLOW study (Fluid Lavage of Open Wounds) was to answer those questions definitively.

Initially, a pilot study with just over 100 patients suggested that using soap might yield fewer adverse events requiring a return to the OR.  Little difference was noted between high and low pressures using a pulsatile lavage device.  Most importantly, the pilot showed that a definitive study was feasible.

FLOW investigators, of which I was one, then began pursuing a multicenter, international, randomized, controlled study to evaluate the effects of irrigation pressure and solutions on open fractures. The US Department of Defense (DoD), the Canadian Institutes of Health Research, and others supported us in the definitive trial. From what we learned in the pilot study and from DoD input, we added a third arm to the pressure investigation and included gravity flow, which is essentially a bag of fluid run through quarter-inch tubing into the wound.

We collected data for five years from 2,447 patients at 41 sites worldwide and achieved a 90% 12-month follow-up.  The results demonstrated that reoperation rates for the three different pressures were similar.  But unlike the size-limited data from the pilot study, using soap in the irrigation solution resulted in a significantly higher reoperation rate than normal saline.

This second finding should convince us that saline is the irrigation solution of choice and that by avoiding soap, adverse outcomes can be diminished and costs lowered for institutions.  The discrepancy between the soap findings in the pilot data and the full study may simply reflect the need for larger numbers.  Intuitively, we might think that soap, which we use all the time for hand-washing, would be better because it helps remove debris and bacteria.  However, the FLOW findings suggest that soap may have a negative impact on soft tissues and bone, making reoperation rates significantly higher. In regard to pressures, the use of a pulsatile lavage with high or low pressures offered no apparent benefit compared to irrigation with gravity flow.  This should allow sites to avoid the cost of using pulsatile lavage devices.

Taken together, these findings should reassure institutions worldwide that do not have access to soap or pulsatile lavage devices that their wound-irrigation practices are not compromised and may indeed be the standard of care based on the FLOW data.